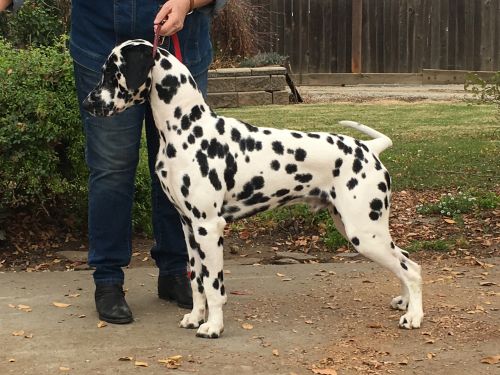 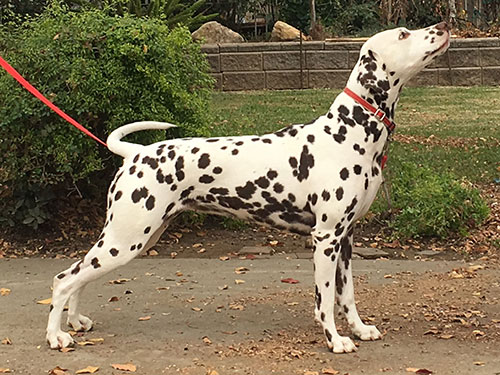 Things rarely go to plan in dog breeding. We had invisioned a trip to Alabama for Mam'zelles first litter to meet her Stud Dog but of course, she came into season ready for Christmas which made it an impossible task. Thankfully we had the opportunety to import a real Jewel from Norway earlier this year. Dalmo's Quota Immigrant or "Anikken" to his friends, comes from a very special litter bred by Kirsti and Tyge Greibrokk of Dalmo fame in Norway.

All their dogs are rather spectacular and apart from being highly succesful in the show ring, they have an impaccable reputation for their temperament and health. Their "Q"-Litter was beyond spectacular since it was sired by artificial insamination with sperm that was 28 years old! His sire Dalmo's Educated Edgar was born in 1990 and the mating resulted in eight healthy and chubby puppies. We are very grateful to Kirsti and Tyge for allowing Anikken to come and live in the US.

Anikken is co-owned by us but lives with Rebecca Garcia in Gilroy, California. He was still very young when he sired this litter, which is why he was on our agenda for Mam'zelle's second litter and not her first. Hey-Ho, plans are there to be changed. Mum to this litter is my precious Holly x Humphrey daughter. The first one of our homebreds, who has two Caprilli parents and our most favorite and well known dogs are all over her pedigree. Follow the highlighted links, to be taken to the individual dog pages for pictures and also links to the OFA data base to view their health test results.

The P-Litter resulted in six puppies which pleased us immensely. Due to our move back to Europe, we took a girl and a boy over with us. Harlow is now in the UK with Aileen where he is incredibly successful in the show ring and has already sired his first litter. His sister Beba is co-owned by us and lives with Kateřina Nikolić of Raul Dalmatians  near Prague. One more puppy girl and one more puppy boy are co-owned by us, who live in California.

The Caprilli P's during Birth

The Caprilli P's as Juniors

The Caprilli P's on Video