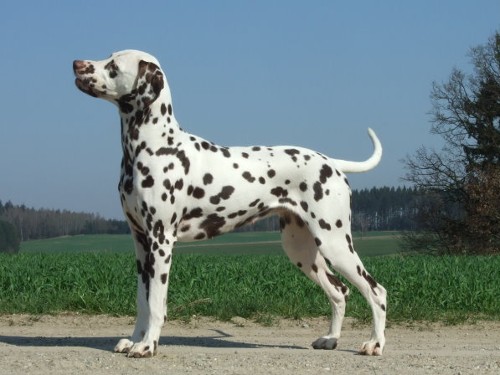 Find Holly on the OFA Database
International Champion
Austrian Champion
German Champion VDH
German Champion Club (CDF)
German Veteran Champion
German Junior Champion (CDF)
German Junior Champion (VDH)
Crufts qualified for Life
Club Junior Winner CDF'09
Bavarian Junior Winner'09
Thueringer Landessieger'10
Brabo Winner'12
Bundes-Veteranensieger '18
Herbst-Veteranensieger Dortmund '18
Caprilli J-Litter 2012
Caprilli K-Litter 2013
Caprilli M-Litter 2015
About Holly
Well, what can I say, I actually was planning to keep a black spotted male puppy from a litter in a year's time, but along came "Holly" or "Lolleklonk" and all good intentions were put aside. From the beginning she was one in a million and started to smile when she was just five weeks old. A long time ago, I wanted to mate her Grandmother Fancy to her Grand sire "Dennis" but this plan never worked out so I guess, in a way, that Holly was long overdue.

Since Holly joined our pack, she has taken us on quite a journey. She is lively but very easy to keep, she will travel for hours without wining, sit patiently in her crate at a show until it is her turn, and will give her all in the show ring. Of course, the same mannerism can be applied to her main job - to be our pet. She has proven to be an excellent mom and guided her first litter of puppies through every stage with great confidence.

She is our non-stop-smiler and earned the nickname "Lolleklonk" through her very own behaviour of smiling, sneezing, and at the same time jumping into the air and turning like a helicopter in a storm, landing in a Klonk. She has a huge will to please and would suit somebody who would like to "work" more with their dog than we do, but she never demands it and just has a huge zest for life.

She is the mother of three litters with all bilateral hearing, no blue eyes and a few patches. She raised them all with a very gentle paw. All her litters had puppies with fantastic temperaments and a lot of potential for the show ring. During a period of ten years, she attended 26 dogs shows to gain the vast number of Champion Titles that are listed above. The last three shows, she attended at almost eleven years of age, to gain her Geman Veteran Champion. She competet against dogs, three years younger than herself and still showed like a bomb.
Her Pedigree
To view more generations and calculate her pedigree CLICK HERE please.
Holly's Show Results