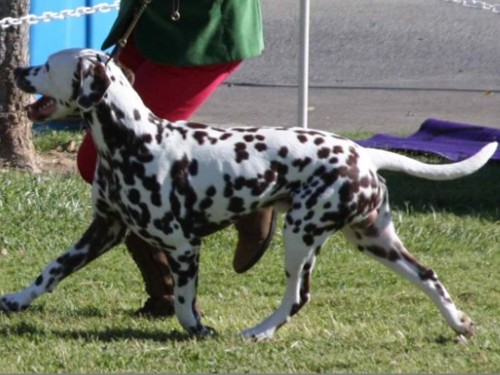 Find Zorbas on the OFA Database

It all started off with my move from the UK, back to Germany, where I had to re-start my judging training. I ended up traveling a lot to Co-Judge Dalmatian shows, since this was part of the program. The first time out, I got my hands on Zorbas’ older, full sister Ultima vom Gramzower Kloster. I walked around her at least four times and could not find a single fault. Beautiful type and movement too.

Of course, the pedigree was not unknown to me either, and as I continued to research more and more about the individual dogs, I knew I wanted a piece of that. Zorbas’ breeder also owns an older litter brother to him and when we talked, he mentioned that he may place Zorbas due to the fact that his own dogs where too closely related. I did not have to think about it much before asking for him to come and join us in the US.

Zorbas’ mom, Suse, is of a beautiful, Scandinavian type and has so far produced 36 puppies, sired by three different dogs. All of them had bilateral hearing and dark eyes. Eleven of her offspring have been tested for HD and all with excellent results. Combine this with a wonderful, calm and sweet disposition and the fact that she was sired by Dalming's Hocus Pocus, who in turn has been described by many as one of the best Dalmatians alive.

Hocus’ sire, Jilloc's A Man in the Mirror, is a well-known quantity to me, since Fancy and many of my own dogs are closely related. "Devlin", as he is known, has not only sired some amazing litters around Europe, but beat all records in the show ring. Zorbas’ sire, Perdita's Right on Time, has also produced offspring with great type across well-known kennels in Europe. His grand-sire is best known as the sire of the legendary Spotnik's Special Selection, who again features on our pedigrees.

Zorbas is not a tall dog, but has a very strong frame and boning. He has a wonderful disposition and is very calm for a dog of this breed but has not lost the typical Dalmatian, clownish behavior. So far he has sired one litter in Germany and four in the US with all but one of his puppies bilateral hearing, no blue eyes and no patches. His Kastle Dal's offspring is being shown very successfully in the US rings. Zorbas was co-owned with Denise Powell of the "Dalmatian Heritage" and lives with Alan Brody. He is no longer available at stud.