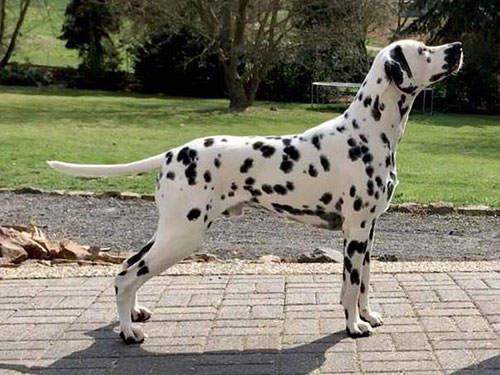 Find him on the OFA Database

During my years in GB, I came across a few Tyrodal dogs, which I adored in type but I never had quite the right bitch, for the dogs available. Sometimes all falls into place and it did in this case as we came across a Grandson of Tyrodal Kracker Jack almost ten years later. The surprising factor about this was, that it was in San Francisco, California and not in GB. The Grandson was Proctor's Sundial NU Revolution, an LUA Gene carrier with a fantastic temperament. Well the rest is history as they say.

Mr. Bond or Elliot as he is known had to stay with me until he was 16 weeks of age so he could travel all the way to Germany. At first I was a bit concerned about how much extra work this would be, once the additonal puppies from the litter had gone home. I did not need to worry at all. I simply integrated him with the rest of my pack during the day and he spend the nights sitting inside HALF a travel container. That is right, only half. The top was completely open and he never made an attempt to get out of the box and cause havoc.

I think he grew up to be a really nice type. So far he has had litters in Sweden, Britain and Germany and some of his offspring are doing increcibly well by obtaining multiple Puppy Group wins. The future will show, what else Mr Elliott Bond will be up to.