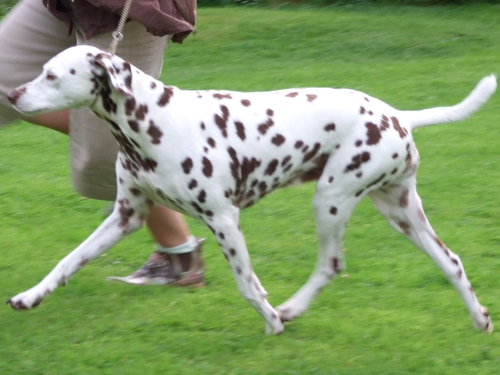 Tara was often referred to as “Queen Mom”. She ruled her little pack of dogs with a very gentle paw and never found the need to argue. She smiled, protected and cared for all two and four legged family members, and has been a great introduction to the breed for us. Madame Arrogancia was another one of her nicknames, she really was above all and if she decided that it would not happen, it did not.

The more we learned about dogs as we went along, the more we appreciated her temperament, which was incredibly sturdy. Nothing could unbalance her unless she wanted it to be. She used to tell us if a water bowl was empty by continuously running back and forth between us and the bowl. The same phenomena occurred when the rest of the pack was naughty, she toddled off to get us and show us what they were up to.

Nothing was worse for her than not being in charge, and since she was not particularly keen on the part of the dog show where you had to be attached to a lead, she did leave me standing inside the ring with an empty lead in my hands whilst she was rolling around on the ground outside the ring. She had simply twisted her head in a fashion that only seems to be known to Dalmatians.

Altogether she went to 17 shows in two different countries and either won or was placed on 15 occasions. She has had two litters for us, the Millview A-Litter and the Caprilli B-Litter. Her daughter Pebbles had later become mother of our Caprilli’s E-Litter. Sadly, due to all our moves, I have nothing after Tara in my breeding program.