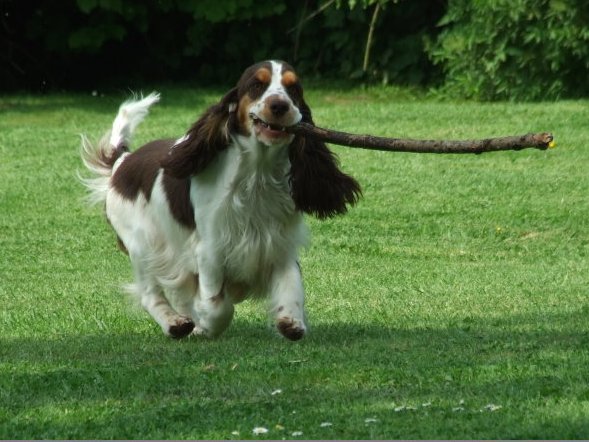 About Lucy
For us as a family it was always clear that we will own at least one Spaniel in the house. Both Paul and I grew up with them and our first two dogs as a married couple where Sam, the Springer Spaniel, and Higgins, the English Cocker Spaniel, who has left us at over 15 years of age.

After Monty’s untimely passing I could not bring myself to keep a puppy from our litter of Dalmatians as I was frightened of comparing but a puppy was tempting so my manic search for the “right” puppy began and ended in Cambridgeshire, UK where we found our little “Lucy”. Since then she has been nothing but a joy to own and earned herself many nicknames including “Dalmatian Terrorist”. She is an amazing asset when it comes to educating our Dalmatian puppies and will not tire to train them in good canine behavior. Always with a strong will and a gentle paw.

She often steals the show here at Caprilli when we have visitors and is incredibly talkative. Her vocabulary is immense and she is the one and only dog that can whine without ever being annoying. Lucy is also an incredibly happy extrovert who suits Holly’s and Fancy’s temperament very well.

If we would have stayed in the UK, it would have been nice to breed one litter from her, for the simple fact that her temperament is awesome and she is as healthy as they come. As it stands, it was hard enough to keep the Dalmatians going during our years of many moves and now she is simply too old to risk a litter from her. We are most grateful to her breeder to have trusted us with this little treasure and we’d also like to thank those of you who have helped us along our way and answered our questions so patiently. It is not easy to search for a puppy of a different breed with the knowledge that it could go wrong so easily.
Her Pedigree