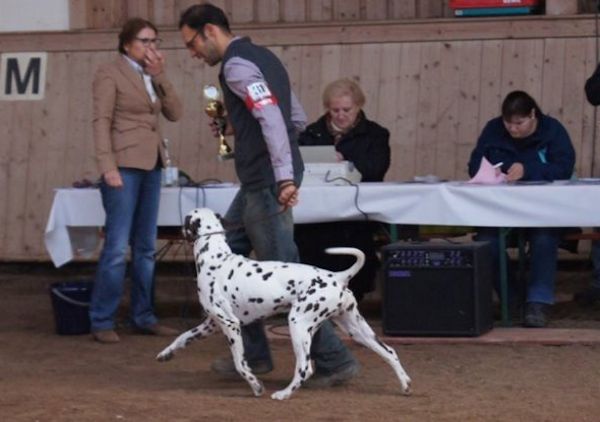 Dallydyl 2010 Litter (GB)
Ebony's Datscha | 2013 (CH)
Vom Hause Fiedanu | C-Litter 2013 (GER)
About Harvey
Harvey is part of our H-Litter and therefore Holly’s brother. He is a strong, yet elegant and powerful Dalmatian who loves to smile. His movement is outstanding and he loves to use it whilst running loose or next to the bicycle. He loves cats and children. Harvey is, like all his brothers and sisters, BAER ++, has full dentition, and his hips have been scored as being free of hip dysplasia.

Harvey has sired, altogether, three litters. The first one was born at kennel Dallydyl in the UK, which consisted of ten puppies. All have dark eyes, no patches, and all ten of them are hearing in both ears. Most importantly they have inherited his exuberant and very friendly temperament. Two more litters were born, of which one was in Switzerland, and his last litter was born in 2013 in Germany, where Harvey also resides.

So far, five of his offspring have been shown successfully in the UK, Switzerland, and France. Three have qualified for Crufts so far, with another two due to enter the show ring, with most of them having gained Group placements and BIS at Matches. Harvey himself was hardly ever shown. Another one that could have done it though, as on the few occasions he entered the ring, he left quite an impression with one BOB and Group 3rd, and after years of absence from the Ring, he also won the Open Class with CAC at the CDF Clubshow 2013 in Munechsgruen, Germany (Thank you Katrin and Frank). It is his owners wish that he will not be used at Stud anymore and I am happy to say that he has some wonderful sons and daughters that can carry on his legacy.
His Pedigree