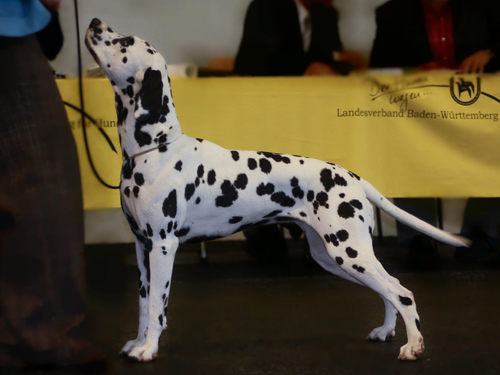 Tegan is definitely the one that I should have not let go. She is one part of my Caprilli-G-Litter and I knew she was awesome from the beginning, but had lost our Monty due to a car accident when Tegan was only two weeks old. I really was not thinking straight at that time. She was co-owned in the UK but then given back to me three weeks before we moved back to Germany. Thank God she came back! Her mom, Fancy, was not so pleased about her return, and therefore we homed her in a co-owned home in Germany with Uli and Martin, near Rosenheim, where she has found the best family she could have asked for.

I love her type, temperament and movement, and in 2010 she produced the Millviews B2-Litter for us in Germany. Tegan, or Meggie as she has been called since moving in with Uli, only had the one litter for Caprilli. Unfortunately due to our move, I had lost the possbility to breed from her daughter, that I co-owned and the two dog owners, who co-owned with me did not take their for their breeding allowance test. She9 will always be something rather special to me.

Tegan only lived with me for a short time period, since she was always co-owned. During the time she was with us, we were in the middle of a big move from one country to the other and therefore there was no time to train her for the ring. She did it anyway and I have no doubt that she could have easily achieved multiple Champion titles. She was only missing one CAC for her German title. The above shows listed are all she ever attended. Since she was never trained for the ring, coupled with her habit of overdoing the Show-Stand we do not have a single picture that does her justice. Her backend is just as awesome as her front part and everything else about her.